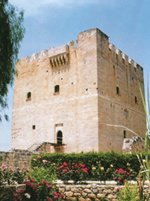 The monastic Hospitaller Orders, which undertook both religious duties and the protection and care of travellers, became very influential. The Knights of St. John of Jerusalem were founded as early as 1048 and as their name “Hospitallers” indicates, they provided medical care and hospitality to pilgrims.

The King of Cyprus Hugh I conferred on the Hospitallers special privileges, such as the right to acquire land, exemption from customs dues on their exports and imports, free milling, estates and houses and, above all, Kolossi which became their Grand Commandery. Kolossi was considered the richest of the Commanderies and extended over a wide area that included 40 villages. On the fruitful land of the Grand Commandery, the Hospitallers cultivated wheat, cotton, sugar cane, olive trees and vines.

Since ancient times the Cypriots produced a sweet wine from sun-dried grapes, observing traditional methods. This wine acquired great renown in the west through the Crusaders themselves, while Cyprus was still under Byzantine rule. The vineyards of Kolossi produced wines which had already become famous as "nectar" and "strong and thick". They were resistant to the hazards of being transported in casks to other markets which put them at the risk of exposure to air. The wines inspired by the special Cyprus yeasts were capable of remaining in good condition long after ordinary table wines of lower strength would have faded and become virtual vinegar.

The Hospitallers were connoisseurs of good wine and experts in production techniques. To this day, the label on wines from the Bordeaux region is adorned with the motto "Ancient Domaine des Hospitaliers", for they originate from estates which once belonged to the Knights Hospitallers of Saint John.

It is therefore not surprising that the Knights of St. John adopted and perfected the production of the sweet Cyprus wine. The Venetians and Genoese who dominated sea trade routes, attached to the wine the designation Commandaria, not merely because it was produced in the Commandery of the Hospitallers, but also because of the esteem the knighthood had acquired among the pilgrims, who anchored off the ports of Cyprus on their way to the Holy Land.

Thus, reports began to circulate by word of mouth about this rich and powerful wine, produced in vineyards associated with a highly respected, even revered, religious order. In Venice Commandaria was even exempt from import tax because it was considered a tonic drink.

The Dutch traveller Cornelis van Bruyn who visited the island in 1683, was particularly impressed by the wines of Cyprus.

Among the products of Cyprus are first its wines. They are excellent and when drunk on the spot are very different from the same wines after export to other countries. For though they come straight from the island, and they bear transport well, yet on the journey they acquire a certain taste of pitch which partly helps to preserve them. I have drunk wine here over thirty years old: It had a very pleasant taste and a beautiful colour.

Archbishop Constantius of Sinai referred in 1819 to the great fame of Commandaria in Europe.

One product of the island has been up to this time fostered with great zeal and care and is still one of the chief articles of export – this is its delicious wine. This fragrant nectar of Zeus, expressed and flowing from the vines which are abound in this shrine of his beloved son Bacchus, is drawn from a part of the island called Comanderia, for here was the lot and inheritance of the Commandery, the order of the Templars and Knights of Malta which lies between Mount Olympus and the town of Nemesos and Paphos. This excellent wine is one of the things greatly in request in Europe.

Limassol produces the best Muscat of Cyprus, however Commandaria wine is definitely the most important product for the inhabitants. This wine is famous in the entire Latin world, and it is said that it has the power to bring back youth in aged people and offer regeneration to those nearing death. We tried a 40-year-old wine that indeed was like balsam, and it was rightly kept – because of its therapeutic properties – for the sick and those coming to the end of their life.

The Feast of the Five Kings 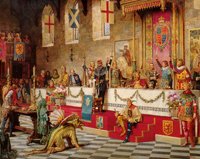 In 1363 in the City of London there took place the now famous Feast of the Five Kings. This was the occasion when Alderman Sir Henry Picard, at that time Master of the Vintners’ Company, hosted a dinner to a highly distinguished group of guests. According to tradition, the Mayor of London sumptuously feasted King Edward III of England, King John II of France, King David II of Scotland, King Valdemar IV of Denmark and King Peter I of Cyprus and many other noblemen. It was the time when Peter Lusignan was travelling around Europe in an attempt to assemble an army for a new crusade.

There is no record of the fare that the wine trader Picard offered to his guests, but legend maintains that Commandaria which would withstand the hazard of rough handling and changes of temperature during transport, actually flowed in rivers. The Vintners’ Company to this day drink their traditional toast with five cheers to commemorate what was a memorable occasion. A painting by Charles Taylor in the Royal Exchange of London depicts vividly the magnificence and grandeur of the Feast of the Five Kings.